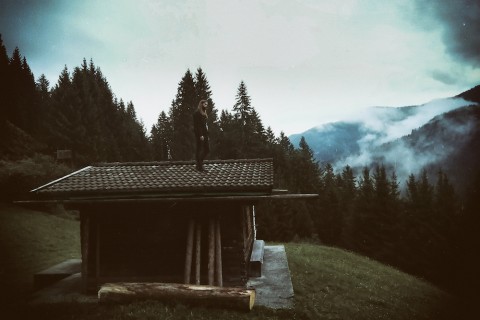 Karg’s discography has never been distinguished by cheerful lively releases, and in 2016 the solo project of Harakiri for the Sky’s vocalist was replenished with a particularly personal and therefore dark album. The dense, full of melancholy "Weltenasche" sounded more confident and powerful than its predecessors, but at the same time, it got even more anguish and emotional depth. Anxiety, the sense of uncertainty and despair that has settled inside J.J. has flooded, giving the album a very viscous atmosphere that allows you to feel what does it mean to be "on the edge".

Was it conceived or not, but in the end the project released an entire trilogy following this style — J.J’s demons were breaking loose, taking the form of the new no less complex and personal songs, which have noticeably stepped towards the melodic post-metal. In 2018, "Dornenvögel" came out. Spiritually, it was very similar to 2016’s "Weltenasche", and two years later Karg is preparing to release the third and the final part of such a peculiar cycle — "Traktat" which comes out on February 7 via AOP Records.

Has anything changed globally? No, at least technically; and in this situation, it’s definitely an advantage, as the fans of the genre and the previous two albums will get kinda the same very solid collection of depressive post-metal, featuring black metal aesthetics and shoegaze elements. "Traktat" retained its former atmosphere in which the continuous tandem of melodics and aggressive vocals, that rather sounds like screams of a madman, also plays a big part. Yeah, such a singing style is not to everyone's taste, but in the case of J.J. it’s nothing more than a metaphor for hopelessness and a critical desire to convert those emotions into something more than just confession.

As for the emotional content, the trend of deepening, which we can observe throughout the trilogy, is also not violated. "Traktat" is rooted in the very depth of its author’s emotional experiences, and probably, therefore, J.J. called this album his "own private autumn". The list of strengths also includes the accents made on the peaks of emotional tension. Such moments are gracefully emphasized by the appearance of convulsive blast beats and some distorted guitar riffs.

In general, the album’s tracklist includes 8 very capacious and assertive songs which require time and attention, desire to listen to and to hear more than just drumming or screaming; and after an hour or so, you will surely be drawn to relisten to it or to take some time for thinking about the eternal.

Karg's "Trakat" is set to release on February 7 via AOP Records. It's now available for pre-order in Europe and US.

Read also: Interview with J. J. from Harakiri for the sky on "Arson" and depression