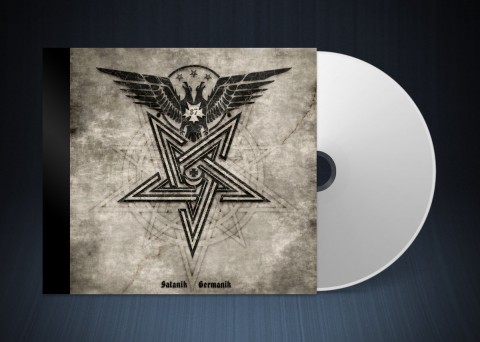 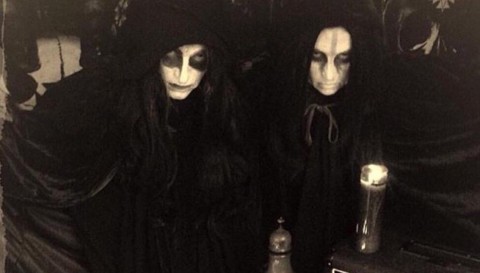 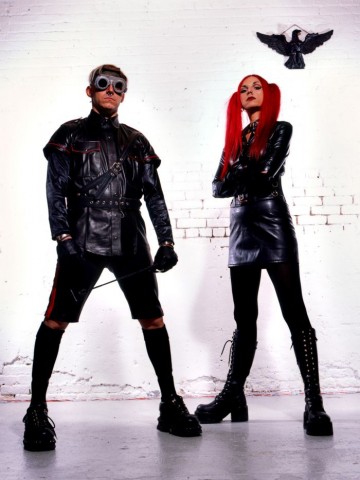 Hanzel Und Gretyl in their 25-year existence have managed to constantly evolve and develop, having shared the stage with huge names in the past, they’ve forged onwards creating their own brand of industrial goth music that heavily incorporates black metal in their newest releases. We caught up with Vas Kallas (vocals, bass) and Kaizer Von Loopy (guitars, programming, vocals) to see what makes them tick and how they find inspiration to write new music.

As a band who have been in existence for 25 years now and constantly finding new sounds, what do you think has been the catalyst for you consistently evolving? Many bands seem to struggle to find new sounds with a similar career length to yours!

Vas Kallas: Well, we both have an open mind to music and like a lot of different genres. I go through a metamorphosis of style all the time, it comes natural to me. Sometimes I need to control my urge to not go too country blues or too hardcore punk or just too weird ambient! But when I put my mind to it I stick to the program and focus. Whatever style we do it’s dark and twisted like the fairy tale.

Kaizer Von Loopy: We have a pretty broad palette of musical tastes between both of us. It’s necessary for us to work within a specific set of self-imposed creative limits that are determined before the first sample is even rendered on my iMac!

How would you describe how your influences have changed over the years?

Vas Kallas: The times and culture have changed since we began in 1993. Back then we were just experimental and allowed ourselves to be open to anything. What evolved was a metal rock noise punk ambient rave industrial music fest. The technology we used lent to the style we created. Had we had a live band, we might have sounded different. We only used what we had to create with, which were machines and crappy guitars with terrible amps. Back then we wanted to combine metal and rave culture which turned into goth and metal which led to biker and rock and now finally into the dark forest black metal!

Kaizer Von Loopy: We have found ourselves moving more in the direction of extreme metal and darker occult type themes as it’s a great way to reimagine the original Hansel and Gretel fairy tale for us! Simply put, it’s fun! ...eviL fun!

Your most recent album seems to be the heaviest yet, was this a conscious decision? What do you think has prompted this shift to more aggressive and challenging sounds?

Vas Kallas: That’s a great compliment to hear. Thank you! I have always been a fan of the heaviest music. I’ve been known in my youth to wake up in the morning and throw on some hardcore punk with my coffee. We are both Slayer fans and understand the religion of heavy fukken metal! In my book of music which is wide and various, the most extremes on either end come in as a favorite. I do believe that the lyrics and the songs in "Satanik Germanik" were written during a dark time for me personally in my home during the winter months. The lyrics are personal even though they may sound more fairy tale.., the meaning runs true to what I was feeling at that time. When I brought them to Loopy, he added his extreme expertise in the production, brought in the extreme heavy sound with drums and guitars plus wrote a few great heavy hitters as well!

Kaizer Von Loopy: I prefer the quieter moments on the album. An album’s heaviness is better impacted by a few well thought out moments of silence or in the case of "Satanik Germanik" a fair amount of church chant.

The sounds of black metal feel very apparent throughout "Satanik Germanik", which BM bands are your favourite?

Vas Kallas: My favorite black metal bands that I've been listening to in the last few years are Celtic Frost "Monotheist", Triptykon, Dimmu Borgir, Rotting Christ, Belphegor, Behemoth, and Mayhem. I also listen to abstract Internet radio stations that play the plethora of underground black metal bands I’ve never heard of and I always gravitate to the more spiritual ritualistic sounding ones... but I will never ever remember all those names made out of twigs and branches!

Kaizer Von Loopy: I much prefer to watch black metal be performed than listen to it at my leisure. I think the best of it is pure evil ambiance with no real detectable meter or structure! The greatest practitioner of this would have to be Mayhem. Cradle of Filth blew me away the first time I saw them in NYC and some years later we managed to tour with them throughout the UK after stalking their tour bus at Ozzfest and forcing them to listen to our CD "Uber Alles". Beyond these, I like Dimmu Borgir as they are the golden standard in so far as having successfully married modern technology to black metal in my humble opinion. And of course The Beatles of black metal, Black Sabbath!

Do you plan to continue the feel of the last 2 albums with your next release?

Vas Kallas: Yes, the next CD will be the 3rd installation of our Dark Grimm Trilogy. Yet to be named.. we are in the creative process now. I do have to point out that this is my most favorite style of music to create!

Kaizer Von Loopy: JAWOHL! There is much more darkness to be traversed! We might have to do a "doppel TM trilogy" hmmm doppel trilogy.

How much has the evolution in creating electronic music from hardware to software helped you during the creative process?

Vas Kallas: I am not tech head whatsoever! I cringe at the computer. I scratch my head in confusion at synthesizers. I only use my simple Studio One software just enough to record bass, guitars, and vocals.. with samples. When people start talking tech to me, my mind becomes mash potatoes. But I have to say the possibilities and sounds that a simple program offers are limitless and enhances the creative mind to an interesting extreme!

Kaizer Von Loopy: That’s a great question that I could talk ad nauseum about being the resident tech geek in HuG. The short answer is that the advances in software-based platforms can even the playing field production-wise and elevate lesser known bands to a better level of production. On the downside, I suppose you could lose something on the creative end when you struggle less! I do admit it has made me somewhat less interested in synth type textures and more fascinated by getting better at recording guitar, bass, and drums. That could change however as modular synths are getting very interesting. There is a trend back to standalone hardware based performances but I don’t think it’s as prevalent in metal. Computers are still hard to avoid. I told you this answer would be boring! Lol.

Do you still use any electronic hardware when recording or are all of the samples and synths now computer-based?

Kaizer Von Loopy: Very little for HuG! Basically, a guitar and a bass would be the only tangible items! I even sold my tube preamps and compressors! I did purchase an Akai sampler but haven’t used it much.

You’ve had a varied career sonically, is there any particular album that you look back on and wish you had done differently?

Vas Kallas: Yes, I wish we had the knowledge and better technology to record the earlier records with heavier guitars and bass. "Ausgeflippt" & "Transmission from Uranus". Our live shows were way heavier sounding than the recordings. But on second thought, it would then lose the charm of the lo fi sound that made those earlier CD’s interesting. And of course there are songs here and there that we recorded in one day, or one take that I look back and regret and wish we had more time to make it better. But I move on easily and that is already forgotten.

Kaizer Von Loopy: I wouldn’t really change anything. I like how the albums have aged over time and display the evolution of the sound! Our albums have been largely DIY for the whole 25 years so it’s very cool to hear the production evolve too as I learned how to record! Lol, if we signed a huge major label deal at our inception and paired w/ a distinguished producer, we might have a different point of view! I think it’s fitting for a band named Hanzel und Gretyl to have every aspect of their being including sonically be a breadcrumb trail of uncertainty! 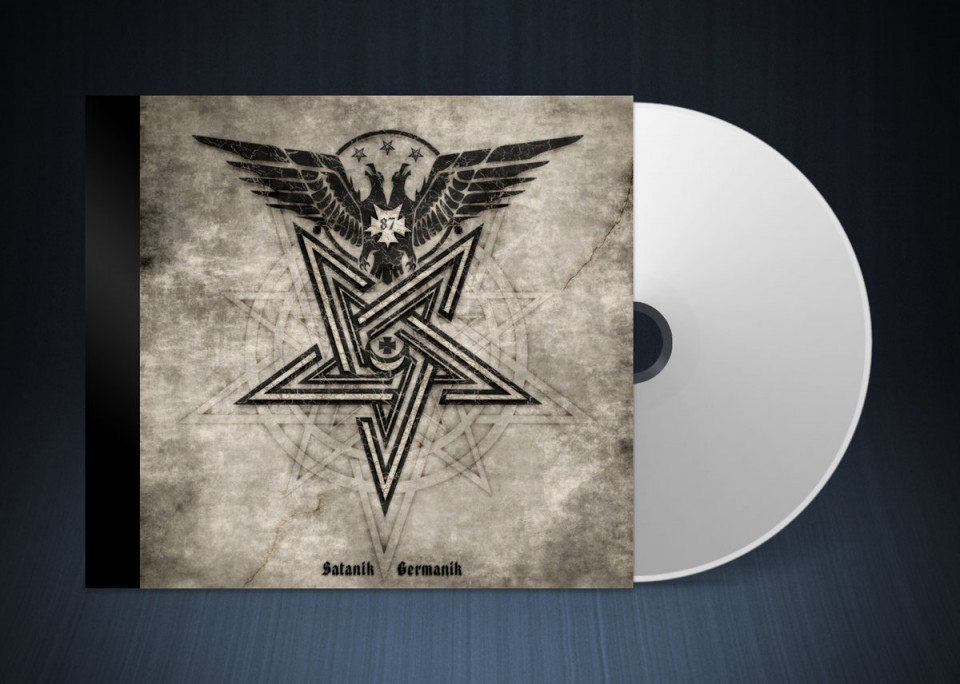