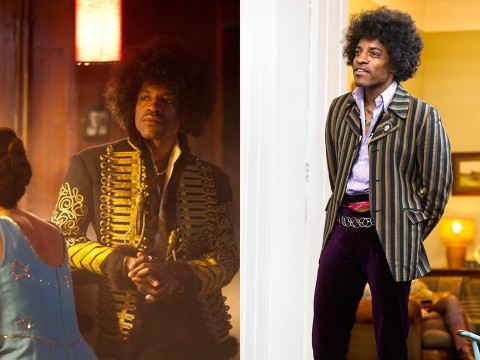 The movie about musician without his music

Speculation on the name of a famous person and the desire to earn money probably were the main reasons for making the film "Jimi: All Is by My Side", which was shown in CIS' cinemas as "Jimi Hendrix". Doubts about creators' desires to make smart and interesting film about a rocker have been caused mainly by the fact that copyright holders forbade to use Hendrix' music in the movie, because they were not granted a full access in the project. Surprisingly, but despite the absence of Jimi Hendrix' songs, which were supposed to be the most important part in the movie about the rock virtuoso, creators decided to continue filming.

Due to lack of access to the rocker's creative heritage, creators had to get out and draw their attention from the guitarist's musical achievements to his love intrigues. However, don't expect that you will watch in the film a fascinating love line or a woman for whom musician had move mountains and who had inspired him to create brilliant reefs or profound lines. No. You will be shown several rapidly changing girls, faceless idle groupies engaged in empty talks and parties. Only one girl that gave more or less good impression of her acting and the movie in general was Keith Richards' girlfriend Linda Kate, who was performed by Imogen Poots. The main character Jimi Hendrix, who was performed by Andre Benjamin (the lead vocalist of the hip-hop band Outkast) is, unfortunately, the weakest point of the film, because his acting is very sluggish and unconvincing.

Who would have thought that the stylish and bright Jimi Hendrix, who could made a spectacular show with his ability to stand on the stage, this Jimi Hendrix, who could forced all Woodstock rockin' and hang out at the show and girls to tremble near the stage, this man, whose critical approach to working becomes a perfectionism, this guitar virtuoso, who inspired and continues to inspire many musicians of international renown, this personality will be shown in the movie as grey not memorable wimpy guy, who is due to luck — met Linda Kate — got a winning ticket to the big stage and glory.

In addition, director's desire to show musician's problems with parents, prejudice against blacks in the mid-70s and so on, was demonstrated very crumpled, and passive behavior of the main character throughout the almost 2-hour movie, which sometimes interrupted by beating him women, caused antipathy or sometimes utter indifference to the character and everything happening on the screen.

Briefly about the main

The film "Jimi: All Is by My Side" is an unsuccessful attempt by Oscar-winning screenwriter John Ridley as a director to tell not the most interesting life story of a world-class guitarist. The minimum Hendrix' music, the minimum Hendrix' charisma and achievements, which would cause the viewer, if not interest, then at least respect to the guitarist's creative heritage, with a vengeance tried to compensate by introduction in the film numerous characters, whose names, if you have not known them before, you will forget to next scene. A lot of unnecessary scenes and empty dialogues make the movie long and boring. Andre Benjamin 's emotionless play turns bright musician in a passive executor of others' wills.

It's better to watch:

Photo is taken at facebook.com/jimiallisbymyside