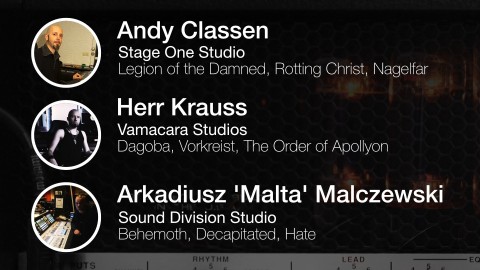 Welcome back to Inside the Producers' Studio. In this series, top producers from across extreme metal share their knowledge and wisdom about recording and production. We’ve hand-picked some of the best and most interesting producers; some from large studios others from more niche circles, whatever their situation, you’ll be sure to pick up tips and get an insight into the minds that are shaping metal in the current era.

This new article is focused on how different producers record and capture vocal performances, and how they integrate them into metal mixes. 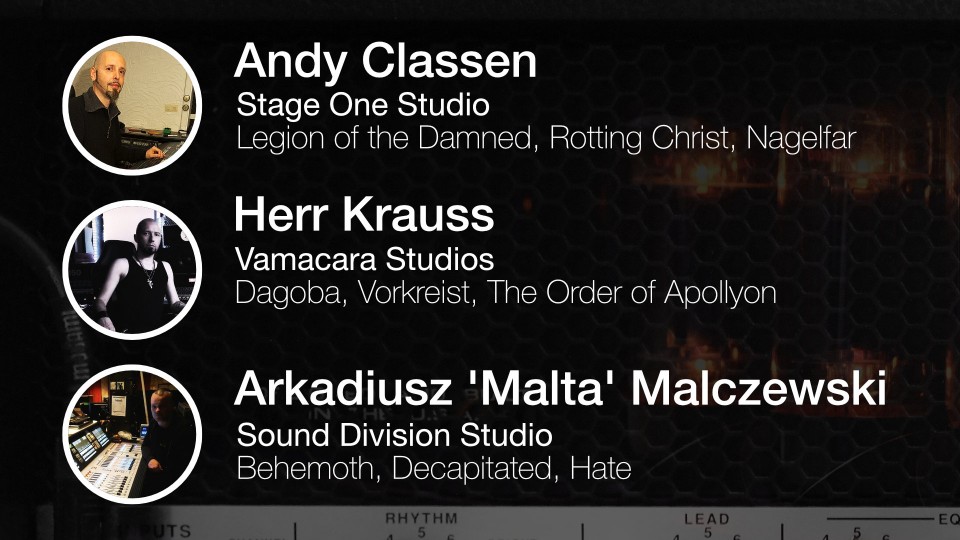 Andy Classen has years of experience producing bands at Stage One Studio in Germany, in his long and illustrious career he has worked and recorded with bands like Tankard, Krisiun, Legion of the Damned, Rotting Christ, and Nagelfar to name a select few. Contacts: stage-one-studio.com, facebook.com/stageonestudio

Herr Krauss is the owner of Vamacara Studios, a seasoned veteran of the underground French scene he has worked on albums by Dagoba, Vorkreist, The Order of Apollyon, Loudblast, and Livarkahil. Contacts: facebook.com/vamacarastudio, vamacarastudio.com

Arkadiusz 'Malta' Malczewski is based at Sound Division Studio in Poland. Constantly working on Behemoth's records, and doing live sound during the band’s tour in support of "I Loved You at Your Darkest", Malta has also produced albums from Decapitated, Hate, and Thunderbolt. Contact: facebook.com/sounddivisionofficial

Which is your favourite microphone for recording harsh vocals?

Andy Classen: I really prefer using my EV RE 20 for vocals, no matter if it's harsh or clean, this mic always give a natural and warm sound — in some cases I also use the AKG 4050, this one adds a little more high end and for some voices it sounds perfect.

Herr Krauss: Well, I've tried a lot of microphones and I think that SM7B from Shure is the best mic for harsh vocal. I plug it into a Neve preamp and 1176 and that's all. I always get what I need. A huge and powerful vocal track.

Arkadiusz Malczewski: I have no favourite microphone regarding this specific style of singing. If one has enough time and mics to choose from, they should try all available vocal microphones and test them with that particular singer. I like Shure SM7 combined with a large-diaphragm condenser microphone. Shure makes it sound „live” and the large-diaphragm mic adds width and depth.

Which is your favourite microphone for recording clean vocals?

Andy Classen: Already answered in the first question, for clean vocals RE 20 is my favorite mic.

Herr Krauss: I love the KSM32 from Shure. But I think that the "mind-blowing" mic was the Aston mic Spirit. So yes. Aston mic spirit is the real deal.

Arkadiusz Malczewski: It is also difficult to give a straightforward answer here. There are many (often expensive) vocal microphones available out there. I usually use what I have available. When it comes to Sound Division, I currently use Peluso P87 – made after the legendary Neumann U87. I also like Neumann TLM 103.

It happens that the microphone does not go well with a particular singer and "colour" of his voice. Then I switch to the microphone set by Steven Slate and use one of their software modulations made after world’s most famous classics.

What is your approach to recording extreme vocals?

Andy Classen: To me, the most important part of vocal recordings is to make sure that the singer has a perfect sound on his headphone

Herr Krauss: I take the time to know how the vocalist wants to record. A lot of extreme vocalists don't like to record their parts with a mic on a stand. They prefer to take the mic in their hands. So I always try to find a way to make them comfortable and to get what I need: great-sounding tracks.

I love to use the natural saturation of my Neve 1073 preamp to add some punch. Of course I compress a bit with an 1176. Medium attack, fastest release and 4:1 ratio.

Arkadiusz Malczewski: There is no single method. Each man is different and requires an individual approach. Such a way of singing is a huge strain for each performer. I try to split the recording session into slots and spend no more than three hours a day on recording vocals. I usually record the vocal parts shortly after tracking the guitars to the first songs. In this way, I spread the vocal session across quite a few days, even up to two weeks but without delaying the whole session. Whenever I hear that on a particular day the singer is not doing too well, we stop and spend the rest of the day tracking guitars or bass. With such workflow, we do not waste the studio hours and the singer is not exhausted when it does not make sense to push them.

What tips can you give to ensure the best vocal performance is captured?

Andy Classen: I did backing and lead vocals on some albums and I know about the recording situation for a singer in the studio, it's so different from singing in the rehearsal room or on stage because of the use of a headphone, a singer cannot simply change his strings or tune his voice, the feeling while recording is very important and has a big effect on the result always!

Herr Krauss: Well, it's a difficult question. I assume that a great vocal performance is a perfect mixture between great vocalist and good gear.

So when the feelings are captured with a good mic and a good preamp... I think it's a good take!

Arkadiusz Malczewski: It is important to give the singer the best recording environment possible. Firstly, they need to hear themselves, in stereo and at well-balanced proportions. If they ask for a slight delay or reverb, they should be able to get those. Each singer has different working habits and one has to listen, feel and understand what they need. There must be no stress or working under pressure. I also believe ambience of the studio interior, recording booth are vital. If one wants to sing surrounded by candles because that gives them the best vibe and inspiration – they should be able to get that.

When recording vocals what treatment process do you usually apply to the captured performance?

Andy Classen: Vocal tracks need compression always, in some cases I also use some de-essing, EQ if necessary and of course I use the option to tighten the timing by editing but I don't use any autotune (in case of harsh vocals there's no use for autotune anyway but also for clean vocals I don't like
the autotune-effect, I prefer good performance with it’s natural tuning…)

Herr Krauss: High end preamp, a bit of compression and sometimes eq to remove some nasty frequency. And... That's all!

Arkadiusz Malczewski: I usually use equalisers and quite heavy compression from the very start during the recording process. But if someone has a weak voice there is nothing you can do in the studio even using the most expensive gear. You can always enhance it while mixing but the result will never be amazing.

What are your thoughts on pitch-correction software?

Andy Classen: Already answered in last question, I don’t like these autotune effects, in some cases I use a pitch shifter to correct parts or single words but mainly I always try to push the performance instead of any auto-correction.

Herr Krauss: It's a tool. Depends on how you use it. Could be great or it could be bad! I use it sometimes just to help clean vox to stay perfectly in tune. Especially when there are some keys or brass...

Arkadiusz Malczewski: For growls and harsh vocals such software is not very effective. But it can definitely help with clean parts. Especially at a point of no return. The obvious solution is always to record the best possible vocals and use the software as little as possible.

Do you record harmonised parts or multi-layered harsh vocals differently to the 'main' performance captured?

Andy Classen: Depends, in some cases I do, sometimes I use just one single lead vocal-track, it's the question of "what you're looking for" but I started the producer's job in times when there was no computer in studios. Sometimes we double the lead-vocals but also in some cases I use a harmonizer to feature the lead track with a doubled track just a little bit pitched up or down or even both.

Herr Krauss: No. Exactly the same.

Arkadiusz Malczewski: I usually use the same or similar setup as for the main vocals. It depends on the artistic approach whether those are only small add-ons to emphasise the main voice or rich parallel harmonies. I do not like to "over produce" with a huge number of tracks.

Read also: Inside the Producers' Studio. How Arkadiusz Malczewski and other producers prepare for recordings