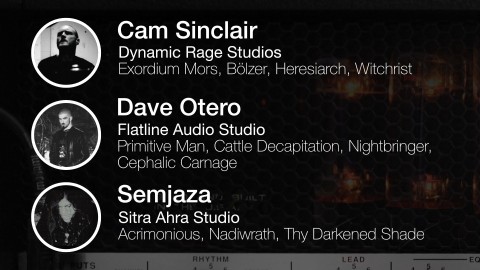 Welcome back to Inside the Producers’ Studio. In this series, top producers from across extreme metal will share their knowledge and wisdom about recording and production. We’ve hand-picked some of the best and most interesting producers; some from large studios others from more niche circles, whatever their situation, you’ll be sure to pick up tips and get an insight into the minds that are shaping metal in the current era.

The first article was dedicated to studio set-up, the second one was about pre-recording, and the third one – about recording drums. This forth article is focused on how different producers record and capture bass performances for the best sound possible. 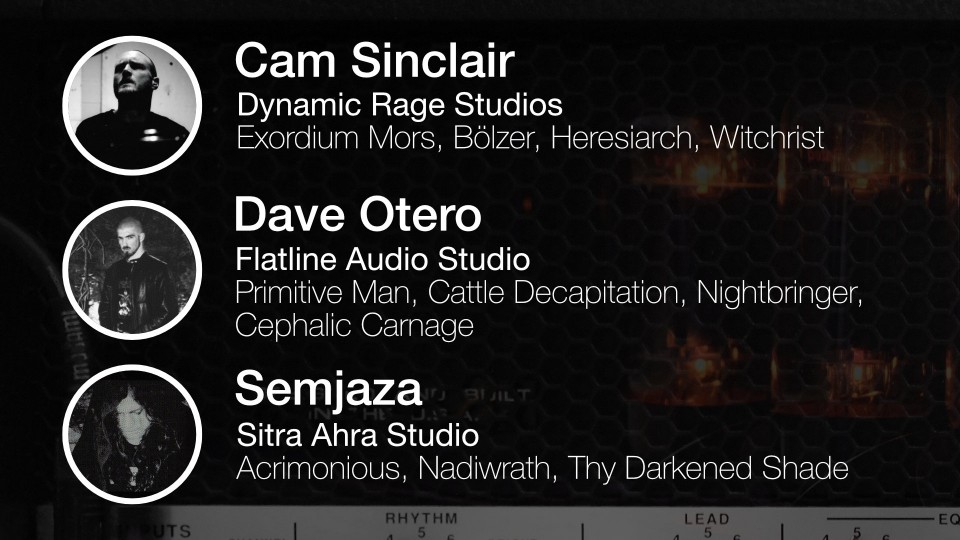 Cam Sinclair is a force to be reckoned with in the New Zealand underground scene, having played drums with the likes of Witchrist, Diocletian and Exordium Mors, Cam is also the owner of Dynamic Rage Studios. Cam has worked producing bands like Bölzer, Heresiarch as well as producing the previous bands he has played in. Contact: www.facebook.com/DynamicRage

Dave Otero has some of the best credentials in extreme metal for nearly 20 years now, he has helped produce the likes of Primitive Man, Cattle Decapitation, Nightbringer and Cephalic Carnage from his studio Flatline Audio, based in Colorado. Contacts: www.facebook.com/flatlineaudio/, www.flatlineaudio.com/

Semjaza is most widely known for being part of Hellenic cult acts Acrimonious and Thy Darkened Shade, however he has proven himself a skilled producer, working with the likes of his own projects and Acherontas. Contact: https://www.facebook.com/sitraahrastudio/

What is your go to amp for recording heavy bass?

Cam Sinclair: No specific amp, I'm currently using a Gallien-Krueger that a friend has loaned out to me. With bass it's more to do with the overall signal chain than any one specific amp.

Semjaza: It really depends on the sound a band or an individual wants to achieve but as far as my own preferred tone is concerned I most of times go for Ampeg Classic.

Dave Otero: If I'm recording a real amp, I'll default to the typical Ampeg 8x10 cabinet and SVT Classic or similar. These days however, I'll often use amp sims or just DI Bass with maybe a SansAmp Bass Driver.

When recording bass do you blend re-amps of the same track through different amps and processing?

Cam Sinclair: Channel 1/2 is generally the recorded bass, that will be the distorted track, the Boss ODB-3 is it! The ultimate bass distortion pedal. I will take two mic signals off of this cab, the primary mic generally being an ElectroVoice RE20 and then the secondary mic will be an NS-10 Speaker. The NS-10 is the 'Lo Dirt' channel (low passed somewhere around 250Hz), and the main mic is the 'Hi Dirt' channel passing everything above that, tracked full-range, the Hi/Lo passing will be done in the DAW.

Channel 3/4 will then be a re-amp of the DI for a smooth/clean bass sound from the amp, same mic’ing as above, but with a Vanguard Audio V13 (Tube Condenser) as the main mic and an NS-10, I will compress these on the way in, the main mic with an 1176, the low with an LA3, these will get the same Hi-Low Pass in the DAW as mentioned earlier, perhaps with a different centre frequency. Depending on how much definition is required I may just use the straight DI for this track instead of Mic'd Cab.

Channel 5 I'll also re-amp the DI out through an 18" sub and mic, and then feed it through an analogue Lo Pass/EQ and stacked LA3 and 1176 style compressor, flattening out any and all dynamic swing.

Finally, these will all be time aligned, phase aligned and sent to a bus for subtle tonal processing and a last layer of compression. I'm often creating an FX Send to a Yamaha SPX1000 for the Symphonic patch which is subtely mixed in to create some width to the bass.

Semjaza: For extreme metal I usually love a mix of clean and gain sound together as one. I often obtain this result by using just one amp but when I can't achieve great results from just one amp I use two as well: one amp for the clean sound and the other for the gain sound. Though, for a traditional metal or progressive rock Steve Harris' clean sound is my favorite one. Therefore, in this case one needs Rotosound steel flatwounds strings through Ampeg SVT. Maybe also, Steve Harris' Precision Bass and a killer player that always will be worse than Steve Harris.

Dave Otero: Yeah. I'll almost always have a few different tracks to blend together. I'll pick certain sources for low-end, others for the more grindy sections of the tone, etc.

What is your top-tip for capturing the best bass performance possible.

Cam Sinclair: Get the guitarist to play it…! My serious answer though is practice and record before going into the studio to hear nuances in playing and set a baseline for dynamics so parts that need more punch actually come out but the rest are relatively similar. Same goes for guitars I guess, just to a lesser extent due to smaller dynamic range.

Semjaza: Learn to play really well and then let yourself loose while recording, let the Higher Self do the job for you.

Cam Sinclair: Other than the obvious necessities such as using fresh strings and checking tune often, I think consistency is one of the most important parts of a bass performance. Whether I'm tracking a finger player or a pick player I'll stress keeping an even and controlled dynamic performance.

How often do you use side-chain compression between the bass and kick drum?

Cam Sinclair: Not often side-chain compression, although I will send kick/bass to a parallel bus and smash it with a 160a/x/xt.

Semjaza: Not often obviously only when needed. Side-chain compression between the bass and kick drum can make things sound a bit more modern than I usually need. However, a few times I have to apply side-chain compression in order to make the kick sound more prominent. Usually, I just can avoid masking the kick by adjusting the bass frequencies accordingly.

Dave Otero: Not very often, but in mixes where I'm having trouble getting the kick drum to be nice and punchy I'll sometimes reach for a multi-band compressor on the low-end of the bass guitar side chained to the kick drum.

What is your biggest pet peeve of bassists in the recording studio?

Cam Sinclair: Nothing specific to bassists, it's usually vocalists who are a pain in the ass. I've been lucky with bassists, the guys I've worked with have always been class acts.

Semjaza: I usually do not record others so for me not to have annoying moments during the sessions, hah. I am most of the times doing mixing/mastering jobs for people who already have recorded their stuff. But what ultimately annoys me as far as bass playing is concerned and when I receive bass WAVE files is the low understanding of bass playing dynamics.

Dave Otero: Either showing up unprepared and not knowing your parts, which is unfortunately common, or back to what I mentioned before and being inconsistent dynamically.

What is your preferred microphone set-up for recording bass?

Semjaza: For the music I play for sure directing the mic towards the center of the cone to capture the most evil sound.

Dave Otero: One of my favorite combinations is a standard sm57 along with a Sennheiser 421. The 57 will capture the upper mids of an aggressive tone well while the 421 will give you a bit of that scoop feel with solid low mids and low end.