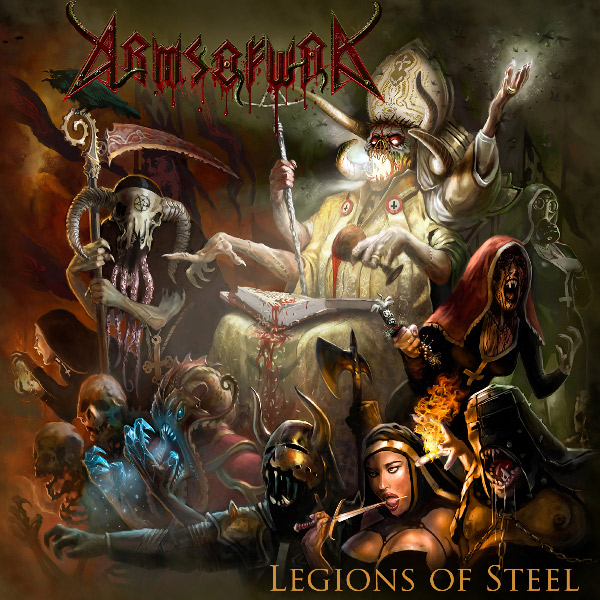 Arms of War's debut album "Legions of Steel" was released on April 19, 2014, via Turntable Records, Division of Groovy International and Noizr Productions. The album was recorded together with Triptykon's guitarist V. Santura, who played a solo in the song "Prophet of Destruction".

Arms of War describe their music as "thrash, melodic death metal", a great mixture of thrash/death metal with elements of groove and heavy metal, with some neo-classical leanings in the solo passages, albeit played in a somewhat lower register. However, in between, his guitar goes into a groove death mode which intertwines with the rhythm guitars. The voice is what a voice should be in death metal".

The album was produced by Arms of War and Triptykon's guitarist V. Santura and recorded at AOW Studio in Brussels, Belgium. Mixed and mastered at V. Santura's Woodshed Studio in Germany in 2012 and 2013. The cover artwork was made by Cyril van der Haegen, an American award-winning illustrator and concept artist.

"Legions of Steel" was released in a limited edition 299 records at Marble Splash Red vinyl and limited edition of 500 pieces on Digipak CD (the first 150 disks have a different design).

In April 2014, there was a premiere of the video clip for Arms Of War's song "Deus Amo". For watching the video, follow the link.

Arms of War "Legions of Steel":