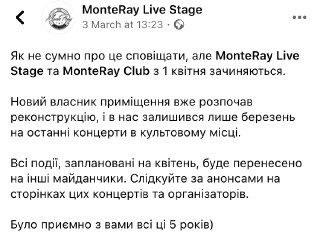 After five years of its existence, the Kyiv's MonteRay Live Stage is to be closed along with MonteRay Club. The concert venue, which hosted Noizr Fest in 2015, will cease to exist on April 1, 2020, according to the official post on Facebook.

All events planned for April are to be transferred to other locations. One of the last gigs held at the club was a concert of Misþyrming. The remaining events, which were supposed to be held at the venue in March, were canceled due to the fear of the spread of coronavirus.