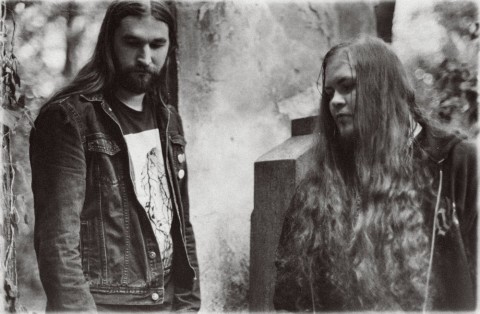 To date, Harakiri for the sky has become one of the most interesting musical projects in the genre of post-black. Formed as a duet in 2011 by the Austrian musicians M. S. (Bifröst, Exartet, ex-Anomalie) and J. J. (Karg, Seagrave, ex-Hoffnungstod), so far, the band has released 4 full-length albums, done a few tours, as well as receiving two nominations ("Hard & Heavy") from Amadeus Austrian Music Awards, and, most recently from the prestigious Metal Hammer Awards in the category "Up and coming". In early August, Noizr Zine talked to the singer J. J. immediately after the performance of Harakiri for the sky at the Czech festival Brutal Assault, asking the musician about the band’s new release "Arson" and his fight against depression.

Your new album "Arson", which debuted February 16, became the band’s first release, featuring Kerim 'Krimh' Lechner on drums. I saw in your latest interviews that you and M.S. are both satisfied with this new collaboration. So, I’d like to know if you guys are planning to continue working with Krimh in the future?

J. J.: Yeah, why not? I think he did a great job. We haven’t talked about it yet, what will happen on the next album, so I can’t say. Probably he’s going to play on it again, yeah.

In addition to Lechner, a female vocalist also took part in the album’s recording, providing vocals for "Manifesto". Who performed this part? How did you come up with the idea to have a vocal duet instead of the original solo part of this Graveyard Lovers’ song?

J. J.: There were two different singers, one was the girlfriend of our producer [Daniel Fellner — Noizr], and the second was a friend of theirs. It was Matthias’ idea to work with the female vocals because I’m not too much into clean, female vocals. He was talking about this stuff since the first album and I thought, "Yeah, ok, let’s do it now", because I was sure if I say, "No", he’ll come with the idea again on the fifth album, so now it happened. He really-really likes it and I’m just, "Yeah, it’s cool but I’m not much into it". So, yeah, it was his idea [to have a vocal duo], but people seemed to like it and it’s ok for me.

To continue talking about singing, I found your vocal work very intense and emotional. How do you usually warm up your vocal chords before live shows?

J. J.: I never do that. I think when you do this — I’ve been playing in black metal bands for 15 years or something, I started when I was 15 years old — I kinda learned the technique through the years, and I think it’s turned out well. I guess it’s ok without warming up the voice, let's see how it evolves in 15 years, but now, I think it’s ok. And yeah, it depends on how many shows you play in a row if it’s just 2 or 3 festivals — yeah, fuck it! — if it’s just 45 minutes, like today, doesn’t matter if I do this like 3 days in a row. If you’re on tour for 3 weeks, yeah, you have to consider and see what really works out. For me, I have to stop drinking and smoking every 4th day or something and it’ll work for the whole tour.

You’ve previously mentioned that your lyrics can be considered as autobiographical. How did you decide, while working on "Arson", that now is the right time to write a song like "Tomb Omnia", about such an emotionally painful experience as the death of a close family member?

J. J.: [chuckles] I don’t know! After a few albums, you think about what’s worth writing about… Sometimes... after all this heartbreak stuff it starts getting boring, always writing about how love hurts and all this shit. You try to find new themes and stuff you can write about. And "Tomb Omnia" is… I mean the thing that happened had a very big impact on my life, so why not write about it? I don’t know if my mom or my sisters have read the lyrics, but that was something that had to be said.

So you didn’t get any feedback from your family members?

J. J.: From my family, no. My girlfriend said it’s too personal to tell the world something like this but it’s very subjective — what’s too personal to tell the world or not, because in the end I just wrote it for myself. And I know every idiot says it but it’s something like therapy. The stuff which happened in "Tomb Omnia" took place in real life, but nobody in my family wanted to talk about it because Austrians, don’t talk about such things, we don’t do this psychological stuff or therapy, everybody is just depressed about themselves. And when something like this happened, everyone has just to live with it by themselves.

To be honest, the main melody of this song is a bit cheerful for such a tough topic. I’ve even seen comments on the Internet of people, writing "the album is a masterpiece, so many good vibes!". Was that a plan to combine such emotionally painful lyrics with cheerful music? Did you have an aim to make it work in contrast?

J. J.: I never read stuff like this [comments on the Internet].

How do you think how should family members and friends should try to act the avoid drug addiction and depression of people close to them? What are the best ways to support people in such difficult situations?

J. J.: That’s a strange question 'how to avoid…' But the thing is I’m not an 'addicted' person, even to alcohol.

But you suffer from depression.

J. J.: Yeah, sure. But in the end, you have to help yourself. I don’t really know many addicted people, so I can’t say. Most of my friends, they’re like me, they do it like, "Ok, now we’ll try to have a good time, so let’s do a little bit of cocaine and stuff", and the rest of the week they are like normal people and fight with the problems by themselves. But I don’t really know addicted people, so I can’t talk about this. I have no examples.

You’ve already spoken about Austrians being more closed people, emotionally. Maybe people should be more open, more outspoken with each other, especially with family members?

J. J.: We don’t do it, I think. I never really did with my mom until 5 years ago or something. But generally, yeah, we’re really introverted, even with my best friends, sometimes when we are sober we can talk about problematic things, but most of the time it takes sitting for 5 hours drinking before, [sighs] "Oh, last week this happened", or whatever, only then do we start to speak about things like this. Most of the time it’s problematic.

Even with friends, it’s hard to talk about personal things?

J. J.: Yeah, sure, because no one really wants to talk but sometimes you just have too.

In 2017, Harakiri for the sky were nominated in the category "Hard & Heavy" by Amadeus Austrian Music Awards. If we speak about awards in general, do you have any ambitions in this regard? Some artists want to get a national award, and some dream about Grammys – what about Harakiri for the sky? What are your ambitions and purposes?

J. J.: I don’t care about Amadeus. It was such a fucking waste of time going to this show, I don’t know what I should call it — where they filmed it for the TV — and, yeah, it was a real fucking waste of time. We were sitting there for 5 or 6 hours. I was always trying to escape but my band member said like, "Stay calm, stay calm! It won’t look good if you leave the hall!".

Yes, that would be a pretty strange move for a vocalist! [chuckles]

J. J.: Yeah, but I don’t care about this shit. I hope we will never be nominated again.

During 7 years since the band’s foundation, you've been on tour in many cities and countries. In one interview I’ve seen you complain about promoters in Great Britain ("I really like to play in GB, even though most of the promoters are pieces of shit"). What are the main problems you faced because of promoters during the tours?

J. J.: [laughs] You know everything! [pauses] Fuck, what am I telling the guys in the interviews! But, yeah, maybe it’s the truth. I think in Great Britain they have so many bands from their own country that they don’t really care about a band from Austria or whatever. It’s like all the American bands say, "If you set up a show in the USA — you’re nothing, you’re worth nothing as a band. Then when they come to Europe they’re [treated by promoters] like, "Oh, that’s your catering, that’s your hotel room and stuff!" and it really works out. But in Great Britain it’s a little bit like in America — you’re not worth much, you don’t get good food (I don’t care about this stuff) but if I’m not even able to drink my own booze backstage, when I don’t get booze from the organizer, yeah, then it sucks. I think that’s not cool at all. However, I really like to play in Great Britain and I really want to go there more often but yeah, that was my impression.

You’ve once said that "Manifesto" song was used as a soundtrack of the TV show "Shameless" and "Fire, walk with me" title was inspired by "Twin Peaks" series. Are you into TV shows? What else TV series are you a fan of?

J. J.: No, not much. But "Shameless" is very cool, yeah. I liked "Breaking Bad" and "Better Call Saul" a lot but I’m more into movies and films, than TV series.

In 2014’s interview with Metal1, you said that your first thoughts on Ukraine were about Euromaidan which you thought would have never been possible in Europe. What associations with our country do you have now or do they remain the same?

J. J.: I don’t think that it’s changed from the time I said that. I think in Eastern Ukraine there is still some kind of a civil war or something. But I don’t really know what exactly gets outside of this Russian controlled area, and I don’t really know what is in East Ukraine now, but what happened with Crimea and stuff [sighs] [is] a fucking nightmare. I don’t really know if the people (I think, most of them are native Russian, am I right?) but I don’t know if they really liked making Crimea Russian. Nothing like that should happen in 2015 or 2018 or whatever because it’s not democratic. And I’m a Democrat, so [smiles].

If there will be any proposals for Harakiri for the sky to perform in Ukraine, will you accept them?

Noizr: Harakiri for the sky's latest album "Arson" is now available via AOP Records, order it here. Check out "Arson" full album stream and review here. Follow the band on Facebook and Instagram.

Interviewed by Anastezia G.
Translated by Anastezia G. and Dan Thaumitan
Noizr Zine thanks Radek Pavlovič for helping to organize the interview
22/01/2019: A few parts from original interview were deleted by respondent request 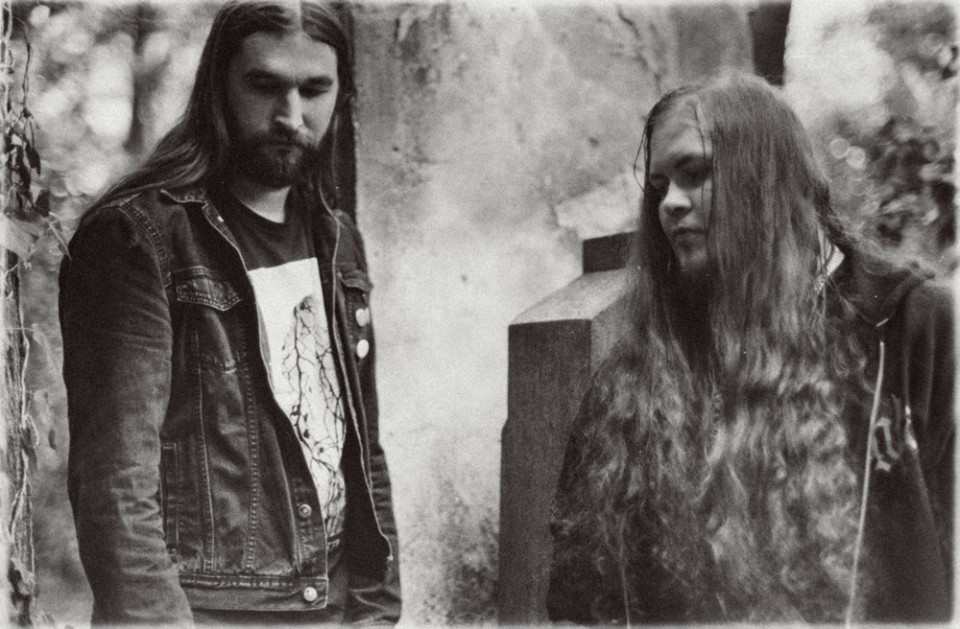