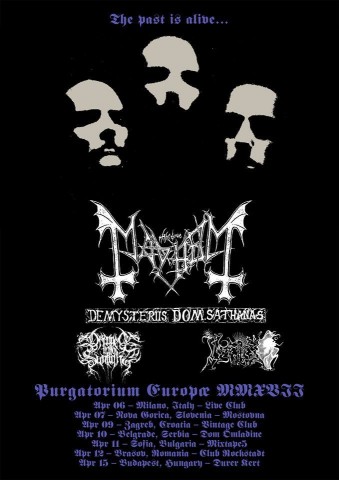 "We have met the darkness and light deep within ourselves and it transformed us utterly," says Adramelech, the leader of the Czech metallers Inferno, whose influence on the development of the genre is unquestionable. In a fresh interview with Noizr Zine, ahead of the new album release and the show in Ukraine, the musician evaluated the band’s 20-year-old career, compared the metal scene of the 90s with the present successes and because of what highly appreciated "Omniabsence Filled By His Greatness" can give way to a new album.

Before Inferno has defined its music as 'Intolerant Anti-Human Black Metal', today in social networks you just call it 'Black Metal'. What has changed?

Adramelech: Not much I think, at least not in the essence. We have never cared too much about verbal definitions or labels of our music as all was already defined by the recordings. If there is a need to express certain topics or emotions through words and music then we do not adhere to keywords and paths set by others before. During those 20+ years of existence, our music went through natural artistic and spiritual development. It reflected all the individualities who were involved on the given recordings, the changes, emotions, vibrations felt and received at the certain period of time. And with the experience and greater practice, it crystallized into current shape. We have met the darkness and light deep within ourselves and it transformed us utterly. We do not feel the need to categorize and segment, we only want to create freely, be honest to our true selves. The approach is what counts, not the label given.

If we talk about the metal scene in general, what can you say about the development of Black Metal since the 90s to the present day? What do you think, is it still within underground?

Adramelech: Generally speaking, I think that nowadays black metal is more mature and developed. Back then, black metal appeared more elitist, which is completely OK in my book, but on the other hand, the magical and satanic imagery was rather superficial. It was more about fiery rebellion, mostly against religions which have always constricted one's freedom and individualism and obscured the paths towards the notional Hyperborea. Today's bands tend to be more subtler and use more meaningful means of expression and self-elevation. Take the real bands like Acherontas, Nightbringer, Irkallian Oracle, Mare, Katharsis, Watain, Thy Darkened Shade or even Reverorum ib Malacht who all have their very personal and different path which is however completely true to the essence of black metal.

And on the other hand, perhaps as a penalty, we have swarms of fucking bedroom bands, internet warriors and wimps who (ab)use black metal as a stupid fashion brand. And even many bands, which were respected for a good reason, became whores and money-hungry rockstars.

But still, today I think that the genre woke up from a long sleep and it is the best time to rip out the rotten roots and plant them into a more fertile ground.

And what about the Czech Republic? If, for example, to compare the audience, perception of the genre, support by the media, labels, etc. If we compare the 90s, when Inferno first came to prominence, and nowadays?

Adramelech: I have never paid extra attention to the local scene and I also cannot say that it has ever been our intent and wish to belong to it. We always had more friends and contacts abroad while here there were many people who liked to slander and boycott us because we expressed our affinity to European traditionalism and autonomous approach to one's homeland.

Once we have even ceased all activities within the Czech underground, gave no interviews, played no Czech concerts and maintained only contacts with people from abroad with a couple of noble exceptions. This lasted approximately for five years I think.

Today I keep in touch with the same people like always, made some new contacts with younger local musicians who make interesting music and their approach is right.

All in all, the Czech scene does have something to offer to the world but its needs more fanaticism and vigour.

Inferno’s seventh LP "Gnosis Kardias (of Transcension and Involution)" comes out this April. Earlier, in the interview, you have said that it planned to be released in 2016. What has prevented the band from doing it?

Adramelech: We did expect to finish the album earlier but there were delays. To be honest, we did not really set an exact date of release, this happened only when W.T.C. delivered all the materials for production.

The last two albums were recorded during two separate week-long sessions. First, we record drums, bass, and basic guitars and the second week belongs to guitar layering and vocals. Mix and mastering take place later. There have always been several months-long gaps between each session which we use to evaluate the material and change things accordingly. This suits us well and it also depends on the busy schedule of Tore Stjerna who besides running the studio does live sound for Mayhem, Watain, and Arcturus.

The sixth album "Omniabsence Filled by His Greatness" (2013), perhaps, is one of the most successful Inferno’s records, with a great atmosphere and light psychedelic notes. And what should the fans expect from the upcoming album?

Adramelech: With "Gnosis Kardias" we stepped into waters which were previously unknown to us. But as expected, the new album is also a continuation of "Omniabsence Filled by His Greatness". The things of the past which made Inferno what it is were re-evaluated and recreated into more potent form. "Gnosis Kardias" is subtler, more figurative, elaborated, cohesive and also more extreme and chaotic. The sounds, visuals, and words offer more ways of interpretation and explanation. "Gnosis Kardias" lives its own life and presents the desperate desire to step beyond the causality of this world to see its hollow nature.

With "Omniabsence Filled By His Greatness", you were also nominated for "Best Hard And Heavy" by the Czech Grammy Award. How do you feel about this nomination and in general about such awards?

Adramelech: That nomination was surprising of course but it left us cold. The black metal does not need such superficial awards from outsiders. There are higher goals...

Ahead you have a series of European concerts, one of which will be held on March 25 in Lviv, Ukraine. Will you perform the tracks from the new album at this gig?

Adramelech: Not yet I think. We need time to properly rehearse the new songs and as you know they are rather complicated. We also come from different cities and distances are quite great so that really takes its toll on the frequency of rehearsals.

I hope to see you at the live ritual in Lviv. Remain proud. Sláva Ukrajině.

Follow Inferno on Facebook
The band's new album "Gnosis Kardias (Of Transcension and Involution)" is out on April 4 via W.T.C. Productions
Below, Mayhem's tour dates with Inferno and Dragged Into Sunlight 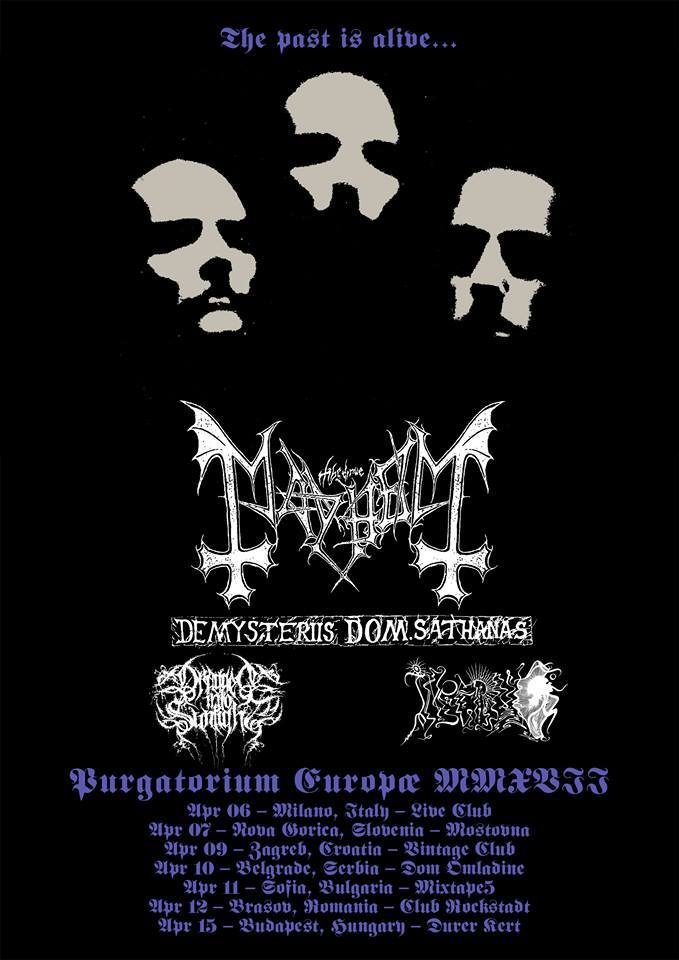