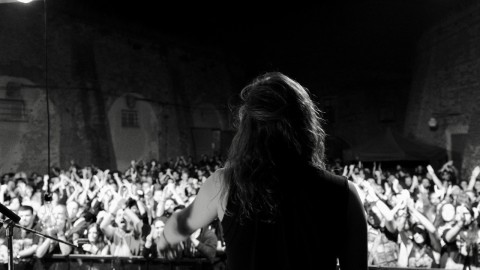 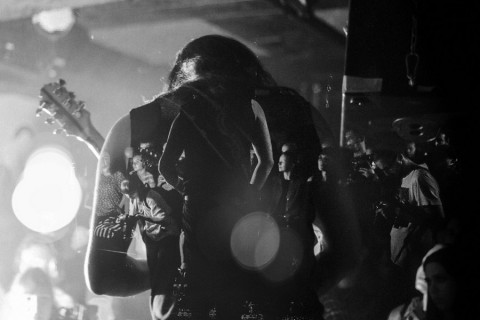 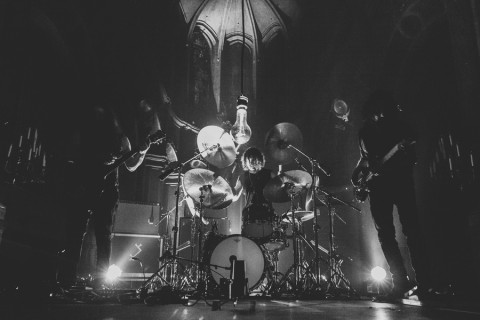 Aluk Todolo have existed on the fringes of French black metal for over a decade now, their brand of music is an intense exploration into jazz, krautrock, and black metal. Each release has demonstrated an introspective and at times challenging take on extreme music, we caught up with the band’s drummer Antoine Hadjioannou to greater understand their motivations, plans for the future and the mystery behind this obscure act.

Despite your sizeable history Aluk Todolo are still a niche band and considering your unique approach I assume you’re happy with this assessment. How would you explain Aluk Todolo’s vision and sonic style to those who are unaware of you?

A-H: Aluk Todolo is a power trio formed in 2004, performing occult rock, a musical exploration of the powers of cosmos and mind by the use of classic rock instruments, guitar, bass, and drums. The words Aluk Todolo mean the way of the ancestors, and our music is a quest for the primordial vibration without stylistic restriction. We most of the time employ distortion, resonance, atonality, unusual drum patterns and melodies, and analog gear, to craft our own esoteric tool.

This summer you finished up playing Brutal Assault, as far as I have seen this is one of only couple of festivals that you have played this year. Given the strength of Aluk Todolo, I assume that you have had offers from other festivals, so what was it about Brutal Assault that made you want to do it? How do you feel the reception of your performance was there?

A-H: As we’re focusing on the writing of new material we tend to refuse shows this year, but Brutal Assault just seemed too cool to miss. We played on the Oriental Stage which is perfectly sized for us. It was an intense show and there was a great connection with the audience. Plus, we were very happy to share the stage with our friends Grave Pleasures. I must say I was pretty tired after spending the day traveling, but their show woke me up and brought me a lot of energy, so thanks to them! 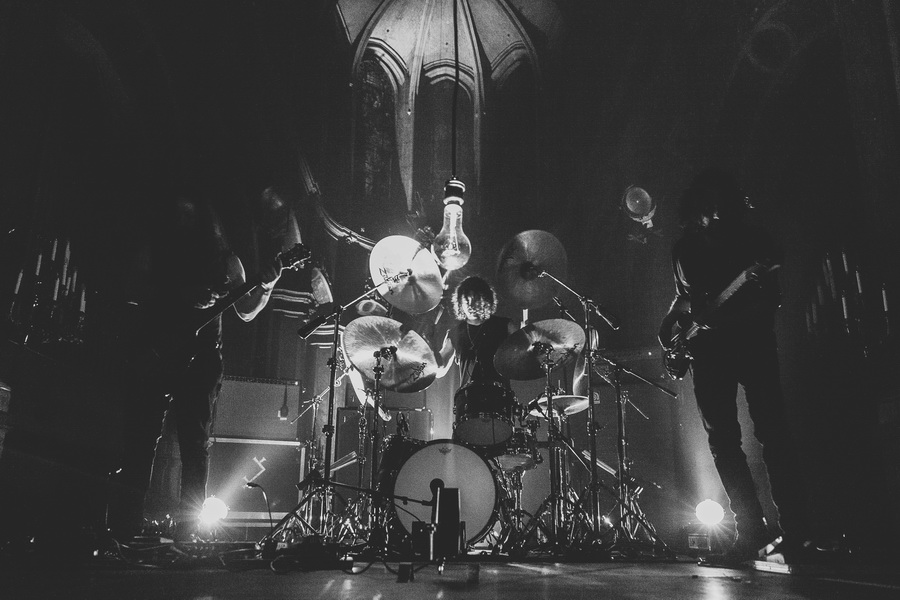 How do you approach selecting material for such big events as Brutal Assault? Despite having individual songs, your albums always feel part of a greater whole and flow to one section to the next, do you try to pick songs that flow or do you opt for a material that’s more 'upbeat/heavy' and in keeping with the overall feel of the fest?

A-H: That’s a question we didn’t need to discuss, as we played our album "Voix" in its entirety. So selecting the material was quite simple. We never do any compromise while writing music, so there’s no chance we’d do it afterwards by selecting material to fit with the feel of a fest. As we are not part of a specific scene, we’re not only invited to metal fests, but also to experimental, jazz, industrial, surf (!) and any kind of fests, and the more people get confused, the better it is for us. 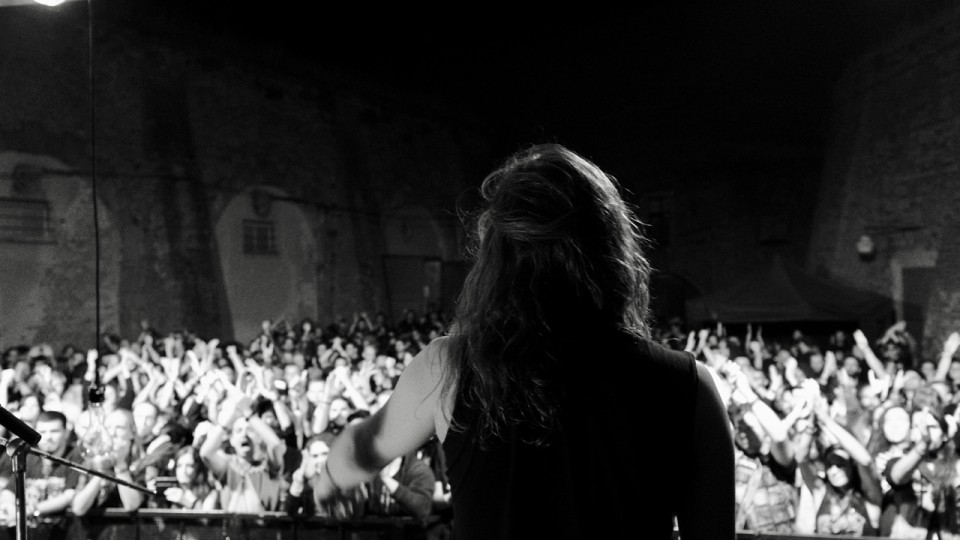 It has been two years now since "Voix", when can we expect a new release from you guys?

A-H: As I said, we’re currently working on some new music. Because of our writing methods and our musical ambition, a new album can take a very long time to see the light. As we do Aluk Todolo for us in the first place, we do not want or need to rush anything. We need a feeling of absolute necessity before considering we’re ready to go in the studio. But there’s a good chance we’ll record the next album in 2019.

You issued "Archives Vol.1" last year – a collection of previous songs recorded during the creative process and select cuts. What was the motivation to release such a compilation? Considering it’s labeled "Vol.1", is this a format you would like to continue producing?

A-H: "Archives Vol.1" is a bit more than a compilation of leftover material. The purpose of this release it to draw a sort of inverted map of our discography. To me, it enlightens our music from a different angle, showing some obsessive elements, and opening some secret passages to travel in the worlds of Aluk Todolo. There will probably be a Vol.2 one day, but Vol.3 might come out first.

I’ve read previously that the writing process is partly improvisation and partly rigid songwriting – if this is true, how do you approach writing music for new releases? Is there a conscious effort to develop the music from previous albums or to just create what feels right at the moment?

A-H: I do not see how something could feel right at the moment if it wouldn’t be a development from previous albums. Each piece is part of a greater whole which, as servants of the music, we aim to reveal. Each new album is like a newly discovered chamber in a pyramid. Our writing process is difficult to rationalize, and we don’t really have a method besides emptying our minds to let the forces come in. We need to wait for revelations, and some occurred to me while watching the waves revolutions and the interaction with the light of the sun and the ocean, in Biarritz last summer. We know we’re on the good way when we get the feeling that music writes itself, and the new material we’re working on precisely deals with this. But it’s useless to say too much about it, it will make sense when you’ll hear the music. 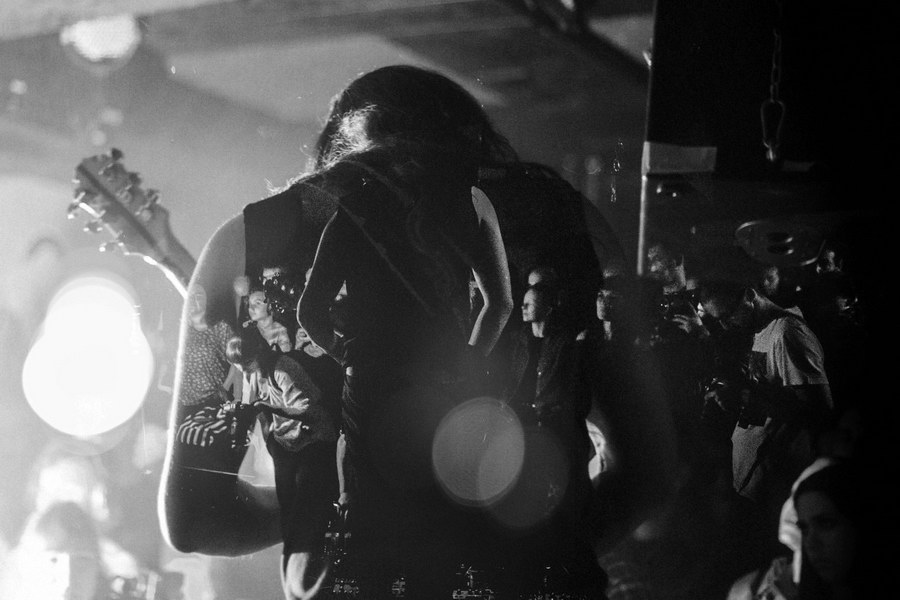 Following on from that, occult rock is a weighty descriptor yet, would you say that the occult aspect relates specifically to your writing style? The nature of invocation of spirits that give you structure and the ideas to improvise? Or do you feel that occult rock is a medium to help in performing ritual – whether it be invocation or evocation?

A-H: The music is the ritual, it is both the evocation and its manifestation, be it during the writing process or the performance, on stage, in the practice space or the studio. Improvisation and rigid writing become one in this mediumnic process. I think that the resolution of a dichotomia implied in your question will be clearly achieved with the next album, because its structure will follow the creative process, I mean it will be the structure of the revelation of the music. Which is something I’ve never heard before!

Your use of Enochian symbols has always been of interest, have you performed many rituals with the use of John Dee’s system?

A-H: As I said the music is the ritual, so after four albums I guess we did, even though we mostly use Enochian for its esthetics, which is not reductive, as the symbols are living beings.

From the scant information available about Aluk Todolo and your motivations, it seems your beliefs system is eclectic even the band’s name, however, is there one particular portion of the occult that is a focus point for you? Be that Enochian magick, the works of Kenneth Grant or perhaps something more eastern like the Yazidis?

Despite being some time ago now, one of my favourite releases was the collaboration that you did with Der Blutharsch, how did this collaboration occur and how was the writing process different from a normal Aluk Todolo release? Would you like to do a similar format in the future – if so, which band (if you could pick any) would you most like to collaborate with?

A-H: We’ve met Albin [the project’s creator Albin Julius — Noizr] in Paris during a Der Blutharsch show we organized, and we became friends. We’ve always liked his music, through all its phases and transformations, and later on when he proposed to work on a record together, we naturally said 'yes'. It was complicated as both bands sent each over two basic track to work on, and we never were in the same studio. Honestly, the creative process was kind of nightmarish. The result is like a retarded child you end up loving more than the others, hehe. I’m not sure we’ll do any other collaborative work in the future, but if we could do it in the past, I mean with a dead musician, then it would be with Scriabin.

You have had a relationship with NoEvDia now for a long time an out of all their roster Aluk Todolo is perhaps the most 'out there' addition to the label. You have a lot in common with the bands on the label but also a large distinction between you and let’s say Antaeus or Funeral Mist, how did this relationship come about and what synergy do you feel that a label like NoEvDia provides to you as a band?

A-H: We were introduced to NoEvDia by Tyler of The Ajna Offensive [American independent label — Noizr], as we were looking for a European label. It is true to say that there is a large distinction between Aluk Todolo and the bands you mentioned, but I guess we all gather through an esoteric, fanatic, devoted and uncompromising spirit. This the proof that NoEvDia, yet a very selective label, is not limited by genre boundaries, and to me, this is what gives to the label such an aura. We feel honored to work with them, it's the perfect home for Aluk Todolo.